THE Crossing-Sweeper cannot fairly be classed among our bare-faced beggars, for he really does something for his livelihood, little although it be; and there is a legitimate look about his broom stump far more respectable in our eyes than that clumsy blind, a box of lucifers. Neither is he, generally speaking, a very persevering supplicant; indeed, there is often such a mixture of jest and earnest in the expression of his countenance, that you throw him "a copper" for the fun of the thing, believing full that he never expected it. No doubt he has a way of his own of "making up his book;" of taking so many against the field, that, if a thousand pass him in a given number of minutes, he can make sure of winning, so far as the odds of 999 go to one. Beside these chances he has his regular patrons, gentlemen who, when they have no halfpence, recognise him by a nod, as if to say, "All right; I have not forgotten; next time;" which calls forth a bow as low as the upper rim of his stump. Then he has another appeal, which is irresistible, and that is, the instant he sees a benevolent-looking gentleman approaching, of commencing sweeping all the way before him, with short, quick, rapid strokes, always contriving to keep about a yard ahead; and, having finished, he makes his politest bend, as much as to say, "Can you resist that?" Should the gentleman put his hand in his pocket and only pull out his handkerchief, the Crossing-Sweeper is, of course, greatly disappointed. Then there are a class of well-dressed "Gents," to whom he never deigns to take off his hat. He knows them well - they pick out the cleanest spots, but never pay. Should any remark by made about them by the neighbouring waterman, he either sticks out his thumb, or placing his hand aside his mouth, gives spiteful utterance to the word "Snobs!" He hates to see the road mended: a load of granite is to him, for a few days, absolute ruin; he cannot sweep it, it is so loose; and no one will walk over it who can find another path. All he can do is to fit the stones together as soon as he can; and they require a good deal of coaxing to make them lie lovingly together. A dry, fine day is another matter - he is at his post if wanted - if it does not rain it is no fault of his. But he likes wet weather uncommonly, for he seems to have a claim upon us then. For our part, when we are short of halfpence, we often tramp bolding through the unswept mud at such a season; and , as old Pepys would have said "this puzzles him mightily."
After all, we fear a great many of the Crossing-Sweepers are sad impostors; we always suspect those who either wear old soldiers' jackets, or plant themselves on Sunday facing the entrances of chapels. The latter, if interrogated, have mostly got old mothers laid up with typhus fever, or wives who have not been out of bed for no end of days: the one prays upon the lovers of peace, the other sticks close to practical piety; for who, after a good sermon on charity, can keep their hands out of their pockets? Your church or chapel Crossing-Sweeper has endless, short pithy prayers cut and dried, which seem admirably to suit all his customers; then he is so kind to poor old women and little children, handing them across gratis, and sending them home with no end of blessings, wishing within himself  all the while (when the neighbouring public-house is open) that the clergyman would have a little consideration and cut his sermon shorter; for your bearer of the broom is always a thirsty subject. Still they are amongst  the least of all necessary evils. They call a studious man suddenly to himself; and we know not how many times during the course of our lives we might have been run over but for the momentary pause, while we searched for the wandering halfpenny. They are life-preservers on a small scale, and touch you as gently as if they loved you, when they see danger near; especially if you are fishing for the needful. Then there is something in that bending of the body, and raising of the eyes, and looking up, as it were, underneath you, which seems to say "Mistake me not, I am but a deity of dirt - a monarch who rules over mud - a sovereign of soles and upper-leather; and although this is my daily walk and ancient neighbourhood, yet I levy not taxes when my subjects are unwilling to pay." They are also influential men in their way: let them once carry a crossing ashant (at an angle of forty-five), and woe be to the shopkeeper whose door they have shunned - respectable customers seldom walk wilfully into the mud. We know a fishmonger who was ruined through refusing to pay a Crossing-Sweeper. The broom-bearer carried his line ashant, into an opposition shop, and, as he said, "swept him clean out." Cheap omnibuses and an improved sewerage will eventually make it bad for the Street-Sweepers. Southwood Smith will come upon them like the "sweet south" breathing, &c., &c., and then London will lose another of its old picturesque characters, and the Crossing-Sweeper be numbered amongst the link-boys, whom the gas extinguished "with excessive light." We shall then have no one to look to our steps or rescue us from the jaws of Sanitary Sewers : the Corporation of London will give in, and the old prophecy be fulfilled, which foretold that the day would come when "A peck of dirt would be worth a King's ransom."

Tuesday, 30 December.. . A girl named Margaret Cochrane is a crossing-sweeper at Charing Cross, and has been so, to my knowledge for several years. She says she is but fourteen, but she looks much older - quite a young woman, indeed. She sweeps a path from King Charles's statue to Spring Gardens; the densest part of the wide throng of hurrying carriages. She plies her daring broom under the wheels, which bespatter her with mire as they fly; she dodges under the horses' heads, and is ever ready to conduct the timid lady or nervous old gentle-. man through the perils of the crossing; she is wet through her thin clothing when it rains; she is in the street all day, the lowest and least protected of that roaring buffeting crowd. And she is a well-grown and really pretty girl; with a delicate complexion and refined features and bright eyes: her mud-stained frock and bonnet are neat, though shabby; and even in her dirt she is attractive, as she drops you a quiet curtsy and says 'Please Sir', holding out her hand and leaning on her well-worn broom. Yet I never - and I have often watched her among her companions-saw any rudeness, levity, nor immodesty in her behaviour: nor did I ever see her insulted by any passerby. Tonight in giving her a penny I asked her if she meant to remain a crossing sweeper; and she said 'No Sir - I think I shall take to selling oranges when I grow up.'
Whether it be modesty or love of change, it is the fact that crossing-sweeper girls seldom stay at their calling after they pass the age of puberty. . . 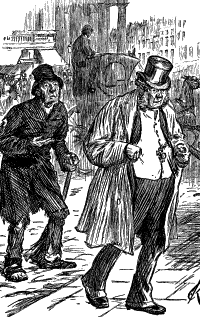